Last summer, I had the chance to do a little Q&A session with James Shapiro from Drafthouse Films, during which we discussed some previous releases, a release which we were on the verge of watching (The Tribe), and some recent releases (The Keeping Room and World of Kanako). There was one other upcoming film that wasn’t brought up called The Invitation, but at the time that was 9 months off, well after the other two were to be released. Fast forward a couple of months, and we get word that James will be visiting our little hamlet and bringing with him a “secret” film. All we knew was that it was an upcoming Drafthouse Films release, and we were going to see it before anyone. Knowing what the rough release schedule was, I assumed that it was probably World of Kanako, which was something like 2 months away from release. Turns out that in the briefcase he brought with him (like, a no shit, honest to goodness briefcase containing a secret), was The Invitation. Six months before it was to be released. As much as I wanted to see World of Kanako, I wanted to see The Invitation quite a bit more. Imagine me at this point as Buddy the Elf, when they announce that Santa will be visiting.

After watching The Invitation, I couldn’t shut up about it. Which, of course, was a bit of an asshole move on my part since nobody else would be able to see it for months. Too bad! Now that those months have passed, the opportunity arose to see the film again. Amidst my excitement over revisiting the viewing experience, there were some slight doubts poking around in the back of my brain as to whether or not The Invitation would stand up the second time around. In short, the answer is absolutely. Even with no surprises this time around, and to some degree as a result of that, the film somehow felt even more tense, more foreboding. The awkward moments are even more awkward, and Sadie (Lindsay Burdge) had shifted in my eyes from a weird Burning Man leftover to a holdout from the Manson family. I’m getting ahead of myself a bit here, but seeing this for a second time gave me an opportunity to focus a little bit more on the characters than the overall story, which was interesting. 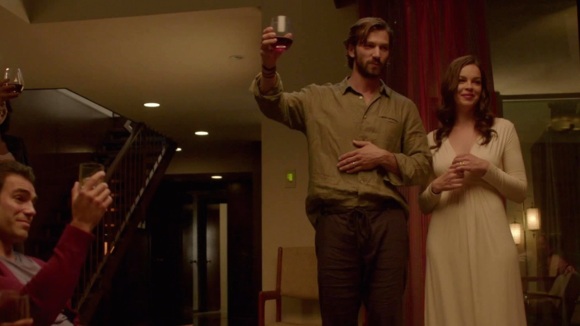 Storywise, The Invitation is right up my alley – a dark, tense, slow burn tale about a group of friends reuniting after 2 years at a dinner party thrown by friends they hadn’t seen for that whole time. Oh, and the party hosts are in a cult. Did I mention that the main character, Will (played brilliantly by Logan Marshall-Green) was previously married to one of the dinner hosts, Eden (Tammy Blanchard) who is now married to a man she met while she and will were still together? Awkwaaaaard. There’s enough back story and character development for you to know fully what’s going on, but it doesn’t get watered down with unnecessary details. I don’t need to know the minutiae of what they all do for a living, how each and every one of them met, or any of that nonsense. You just know that they’re old friends, and that’s more than enough. The mystery surrounding the inclusion of Sadie, introduced only as someone they “met in Mexico”, and Pruitt (John Carroll Lynch, one of the best unnerving actors around, in my opinion), who is only introduced as a “friend” makes it that much more intense.

As the night unfolds, and the story builds, we learn of a tragic incident in Will and Eden’s past, which they’re both coping with in their own way. Will is understandably still upset by it, a feeling that is only fueled on further by Eden seeming to just bury it in the past. The entire cast does an excellent job of playing off of the drama between these two, to the point where their nervous reactions to uncomfortable situations leave you sitting in your seat, feeling as though you’re in the room in the midst of all of it. There was more than one time, both times that I’ve seen it, where I truly felt that uneasy feeling of being in an awkward situation which you have no real control over. Couple this with Eden and her new beau, David (Michiel Huisman) deciding that this happy reunion party is a good time to introduce their friends to their lifestyle.  By the time Claire (Marieh Delfino) decides she’s had enough and wants to leave, you kiiiinda want to get the hell out of there yourself.

What really struck me about The Invitation, and this was true even the first time I saw it, is that it’s not necessarily a difficult story to figure out. By that I mean that you know there’s going to be a twist, and while the details might not be fully realized before the actual twist itself, you know that something is going down. The tension is palpable from literally the opening shot of the film, and it never lets up, so the only really shocking twist would be if literally nothing bad happened at all, and everyone had a lovely evening. We all know that’s not going to happen, because how boring would that be? In spite of it’s somewhat predictable nature as a story, it’s still a damn good story, which is a huge credit to the writing and directing team. Honestly, it’s a bit of a shock to me from the writing side of things, as the two men responsible for the screenplay (Phil Hay and Matt Manfredi) have, in my opinion, not been involved with a single project worth even watching before this. Of course there was also the question mark looming over the direction; Karyn Kusama hasn’t exactly had the best track record since Girlfight. So, yeah, kudos to the three of them for turning things around big time and creating an incredible film!

Shane loves movies, records, bicycles, pretzels, and a fine root beer. You can find him being incredibly random here @shanexedge

Seriously, Roxanne, Don’t Put On The Red Light: A Return to THE INVITATION