I remember the very first time I saw Pee-Wee Herman, the luckiest boy in the world. I was very small. My Uncle had purchased a copy of Mad Magazine, spoofing the character. This was also my first exposure to Mad, a fact I think Pee-Wee himself would really like. I wanted to know what this guy was, what was he about, and what makes him so instantly likable. I did not have to wait long as a TV show and feature film were in the works. He became insanely popular, with toys and lunchboxes flooding stores. I became an expert almost immediately, soaking in all Pee-Wee knowledge, and continuing to love Mr. Herman to this day. Although, his residence in pop culture hasn’t been omnipresence, not showing up for years at a time, his charm had laid dormant in the hearts of millions. This characters and his appeal are seemingly endless, like a sweater that someone keeps knitting, and knitting, and knitting, and… you get the idea.

When it comes to Pee-Wee’s Big Holiday, I was excited and apprehensive about a new film 30 years after Big Adventure. Pee-Wee’s Big Adventure is by far one of my favorite films. Love it. Co-written by Paul Reubens (P.W. Himself) and Phil Hartman, music by Danny Elfman, and Directed by Time Burton. This film set a bar so high, that it can still be considered the apex of Reuben’s career as well as being the initial wave that got the other three off the map and into my heart. I loved it so much, that when it came time to see the sequel, Big Top Pee-Wee, I could only take about 20 minutes before turning it off. To this day, I have not seen it. Needless to say, This new one was going to have to be good. 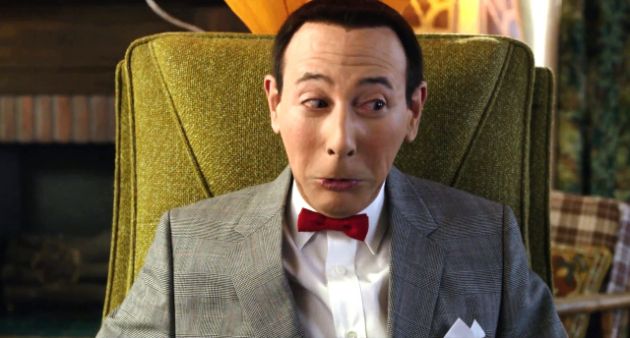 And… It is. This film is, of course something entirely new. Like with all incarnations of Pee-Wee, there is no continuity to anything else. This Pee-Wee has no bike, or playhouse, or farm, or wacky neighbors. Well, at least not ones you know. In fact, this version tells us of a Pee-Wee that has never left his home town, of Fairville. Being of a new story-line did not mean unfamiliar territory. There was a little bit of what makes Pee-Wee great thrown in everywhere. There were Rube Goldberg machines on massive scales, gadgets, disguises, toys, dry humor mixed in with basic lovable good old fashioned dumb humor. Also being new did not stop this film from having references to the original film hidden everywhere. Frequently Pee-Wee has elaborate meals where he only takes one bite and throws the rest out. He is called a “rebel” at one point. He has a disguise that resembles his cowboy disguise from the Rodeo in Big Adventure, he STILL hates snakes, even props from Playhouse showed up here and there. Okay, so the film has the feel. It should. Reubens co-wrote it himself. It is to no real surprise that the story is sweetly simple.

As previously stated, Pee-Wee has never left his home town. He is happy and content. The town loves him and he loves it back. That was until a stranger rode in, in the form of actor Joe Manganiello playing himself. Pee-Wee immediately and sweetly bonds with the star and their whirlwind relationship begins. Joe questions Pee-Wee on why he has never left Fairville, and challenges him to do so by inviting him to his birthday party in New York in a few days. Pee-Wee jumps at the chance and starts a cross country journey. Thus, the new adventure begins. It should be noted that this cross country trip goes from West to New York, where Big Adventure went East to L.A. Along the way, Mr. Herman encounters group after group of wacky travelers, very much in the spirit of Big Adventure. Criminals, salesmen, adventurers, simple farm folk, and even the Amish lend Pee-Wee a hand in a delightful episodic journey. He learns a lot about himself, and does his best to make it to Joe and his fantastic New York Birthday party.

My favorite thing about seeing this film was seeing it at the Alamo. It was released on Netflix, so they could not charge for the film. Most people saw it at home alone, or in a small group. Seeing it in the theater was an amazing experience. The audience was full and laughing the entire time. I thought maybe I was just digging it, being a lifelong P.W. fan, but the atmosphere in the room was joyous. I think maybe we missed Pee-Wee. He is a part of us. And for 62 years old, he looked great! Pee-Wee’s Big Holiday is a fun ride and a nostalgic trip for Pee-Wee fans of all ages. I am always glad to have him back.

A Holiday Thirty Years Worth Waiting For