To say that I am a Miyazaki fan is a great understatement. I put his film fight up there with Disney classics. The smoothly painted and animated images that dance on screen just as colorful, with the exception that Ghibli films are animated 60 frames per second instead of Disney’s 40. This gives his work a very realistic motion. Of course Studio Ghibli fan will recognize Totoro, the Micky Mouse of the studio as it were; becoming the mascot and logo for the company. This is Miyasaki’s most beloved film worldwide, and for good reason. Many of his films deal with concepts of human arrogance: pollution, deforestation, good characters being forced to do bad, greed etc. My Neighbor Totoro deals with a very simple, yet all encompassing concept, life. Growth, youth, death, and spirit are the things that our lovely neighbor brings to light in this film.

I was a teen when I first discovered this gem. I was in a Walmart in Winchester, VA looking through the VHS section, when I saw it for the first time. My eyes wet with remembrance This film changed me that very day. I’ve always loved anime style, and for those younger than me, it may have seemed pervasive in their lives. Not for me. In the 80’s you had, Voltron, Robotech, and if you were lucky, someone managed to get a copy of Akira. I remember getting European magazine and learning about Sailor Moon and Dragonball years before they hit the US. I thirsted for anime as a tween/teen and even more as I got older. So here it was, a new cartoon with cute cuddly fluffy creatures that could only remind me of Disney. (years later, once Disney bought Ghilbi’s American releases, they put Totoro into Academy Award nominated Toy Story 3) There was also an ad to get a stuffed mail away Totoro. Remember a few thing here: I was falling in love with a movie I had never seen, I was a teenager getting all sentimental about a small stuffed toy, and I could feel my cinematic world expanding just looking at the cover. Of course I went home immediately, and was transported to the fields of rural Japan and all its Shintoist wonder.

This is a simple film on the surface. Preschool kids can get just as engaged in it. Two girls move with their father to the countryside while their mother recoveres from Tuberculosis. Soon they discover all the hidden sprites of the house and surrounding country. This of course leading up to meeting the magical spirit, Totoro. They experience wonder and then heartbreak when there is a scare with the mother’s illness, and of course resolution at the end. The subtext and concepts depicted have a fantastic sublayer. This film is about two children dealing with possible death and new life all at one. They move to an open rural area teaming with life. Evey plant is drawn correctly and identifiable as a real plant. Every shot has life forms crawling everywhere on screen. Even indoor shots are of natural wood structures and ninety percent of the film (guessing) is outdoors. We learn that plants grow due to the magic of Totoro. He can raise acorns into skyscraper sized tress in a matter of minutes. He is the wind. He is what Westerners would call “mother nature.” He also happens to be a giant fuzzy fluff-ball of a monster, and curious as a cat. We meet his cohort spirits, smaller Totoros, as well and the lovable Cat Bus. For those who don’t know Cat Bus, he is a giant cat with a hollow seating area in his body. He has like 20 legs and a Cheshire grin. Headlight eyes and speed to boot. This character was unlike any I had ever seen. Like a misfit Wonderland character that some how got crossed with the cartoon taxi from Who Framed Roger Rabbit. He doesn’t play a main roll in the film, bust ask any kid who sees it and they will tell you how wonderful he is. 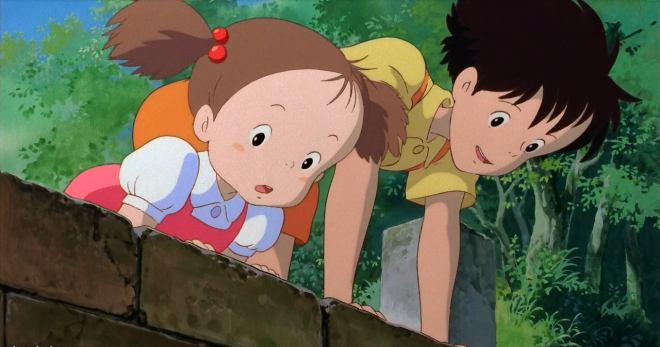 Now the actual story: As stated, the girls, who are like 4 and 7, have a sick mother. At the beginning, they are carefree and excited to have their mother visit while continuing treatment. Father is at work a lot, so the girls have time to meet the forest ghosts. Of course father works long hours, so the girls are on their own when not looked after by a local kind elderly lady. Still sounds very Disney right? Where here is were it gets serious. Mom gets sick, can’t come home. Later, the girls get a telegram saying come to the hospital right away, and they expect the worst. Now this may not seem serious, but these are small children. They take it deadly serious. Satsuki, older tries to tell younger Mei that mom can’t come home. Now here is something that I’ve never seen in classic Disney film, Mai bawls. Large wet tears stream out of an anguished wailing face. It is so effective, that again, I tear up thinking about it. There is little that cuts me as deep as an unapologetically crying miserable child. It hits me in my motherly soul. She doesn’t understand you see. She is a little too young. Later, when older Satsuki is talking to Granny, the elderly neighbor, She bursts into tears screaming, “She’s probably dead already!” now not having to put on a brave face for her sister. This is harsh. This girl understands death well enough, and this would never be in a Disney cartoon. It is exactly what a girl her age would say a petulant statement that speaks of harsh reality. This is a new hash lesson for our lovable Satsuki. Mai overhears and runs away. There is a terrible moment where it might seem like Mai fell into a river as locals find a lone shoe floating there. Granny and Satsuki are beside themselves. But, it turns out she is okay. Mom is fine and a magical voyage to view her through a window, give her an ear of corn picked just for her, and to see she is okay is all it takes to ease their beautiful minds. This is the part that spoke to me personally. As I was seeing this for the first time, my father was recovering from multiple strokes. It was exquisitely cathartic, and I could tell it was designed to be so. If you have a child, or anyone, with an ailing parent, have them see this film.

Pretty much every Ghibli film, but especially the one’s Miyazaki did himself, are amazing. All deal with similar concepts and are told trough astounding animation and emotionally driven stories. Miyasaki is a recognized master and won and academy award for Spirited Away, which he declined to accept because it would have taken him away from his then current project. No film in this master’s portfolio is it apparent than in My Neighbor Totoro. It is so simple yet so deep. You can look into backgrounds for days and find substance. You can simply listen to the music and sounds and be wooed by this magical film. It is a classic and deserves all the acclaim and hype it has certainly got over its lifetime. A classic to be enjoyed by human spirits of any age. It is a celebration of life and all the magic it brings.

Neighbors For Life: A Review of MY NEIGHBOR TOTORO

One thought on “Neighbors For Life: A Review of MY NEIGHBOR TOTORO”