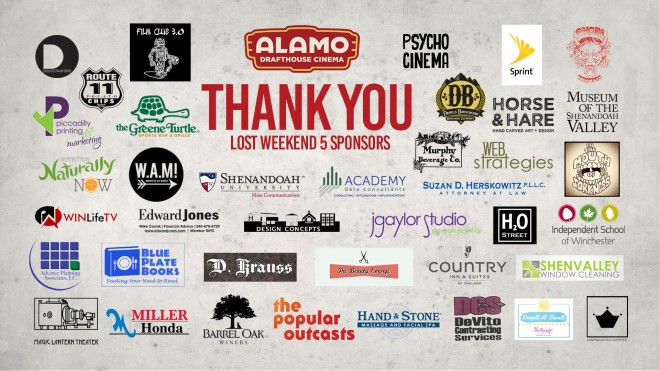 Film Club’s LOST WEEKEND V will be a celebration of film at the Alamo Drafthouse Cinema from Thursday, February 25th through Sunday, February 28th.  Twenty feature films from around the world will be featured, including EIGHT advance screenings.  None of these films have been screened theatrically in Winchester before.  Other weekend highlights will include a Devils Bakbone beer tasting, a free photo booth, menu specials based around films, free buttons and more!

158 weekend passes are available.  Passes guarantee you a seat to all eighteen screenings for only $35.

During Lost Weekend V, Film Club will host a silent auction whose proceeds will benefit the MUSEUM OF THE SHENANDOAH VALLEY

Please help Film Club and the Alamo make independent cinema more available to the public than ever before.

Film Club 3.0 is a community of film fans that meets as often as every week at the Alamo Drafthouse to screen independent, foreign, documentary and classic films.  Founded and led by Andy Gyurisin, the group has grown to over 2,000 members in two years of screenings at the Alamo and has helped to demonstrate that independent films are in demand in the Shenandoah Valley.

Country Inn and Suites is located next to the theater and is offering a group rate for the weekend.  Call 540-869-7657 for rates and availability.

This is our full line-up of our Lost Weekend V schedule arriving to the Alamo Drafthouse Cinema in Winchester on February 25th – 28th, 2016.

TICKETS CAN BE PURCHASED BY CLICKING HERE

In a dystopian near future, single people, according to the laws of The City, are taken to The Hotel, where they are obliged to find a romantic partner in forty-five days or are transformed into beasts and sent off into The Woods.

“A wickedly funny protest against societal preference for nuclear coupledom that escalates, by its own sly logic, into a love story of profound tenderness and originality.” – Guy Lodge, Variety

A tantalizing mystery in the vein of The Secret in Their Eyes and Tell No One, The Vanished Elephant follows popular crime novelist Edo Celeste after he receives a cryptic envelope on the eve of the publication of the final installment in his beloved “Felipe Aranda” detective series. The envelope, which contains a series of enigmatic photographs, may be a long-awaited clue to the mysterious disappearance of his fiancée seven years prior. As Celeste descends down a rabbit hole of strange occurrences, stumbling on a steady stream of new clues, his obsession becomes increasingly more complex and dangerous, and the line between the fiction he creates and the reality he lives in quickly blurs.

Macbeth, the Thane of Glamis, receives a prophecy from a trio of witches that one day he will become King of Scotland. Consumed by ambition and spurred to action by his wife, Macbeth murders his king and takes the throne for himself.

“Justin Kurzel’s blistering, blood-sticky new screen version of Macbeth unseams the famous Shakespearean tragedy open from the nave to the chops, letting its insides spill out across the rock underfoot.” – Robbie Collin, The Telegraph

WHERE TO INVADE NEXT

To learn what the USA can learn from other nations, Michael Moore playfully “invades” them to see what they have to offer.

“Where to Invade Next is so heartfelt and sincere, it’s tempting to say that Moore’s mellowed with age. But beneath its innocent-abroad optimism, the film has a stinging truth that’s hard to ignore.” – Chris Nashawaty, Entertainment Weekly

A married couple preparing to celebrate their wedding anniversary receive shattering news that promises to forever change the course of their lives.

“Anchored by a sensational Charlotte Rampling as its lead, the movie combines Haigh’s perceptive style with shades of Mike Leigh’s “Another Year” to create a quietly moving and deceptively tragic look at aging romance haunted by past mysteries.” – Eric Kohn, indieWIRE

“Wild Tales is loose-limbed, rowdy, and exhilarating – in its vibrant lunacy, and with its cartoonishly brash violence, it’s a little bit Almodóvar, a little bit Tarantino.” – Stephanie Zacharek, Village Voice

After his girlfriend Nina dies in a car crash, Rob unsuccessfully attempts suicide. As he begins to overcome his grief, he falls in love with a coworker, Holly. Their relationship is complicated when Nina, unable to find rest in the afterlife, comes back to life to sarcastically torment them whenever they have sex.

“Nina Forever is the film to follow, and with it, the Blaine Brothers have brought serious game to the screen. It’s clear the film world’s latest sibling tag-team has come to play.” – Michael Nazarewycz, Way Too Indie

Men and Chicken is a black comedy about two outcast brothers, who by getting to know their unknown family also discover a horrible truth about themselves and their relatives.

“A hybrid of The Three Stooges comedy and the lunacy of ‘The Island of Dr. Moreau.” – RogerEbert.com

A little boy goes on an adventurous quest in search of his father.

“It’s both the best children’s animated film this year since “Inside Out” – you might call it “Outside In” – and, unexpectedly, a more stirring depiction of the deadening modern megalopolis than most heal-the-world documentaries. ” – Nicolas Rapold, The New York Times

A TALE OF TALES
Advance Screening

Once upon a time there were three neighboring kingdoms each with a magnificent castle, from which ruled kings and queens, princes and princesses. One king was a fornicating libertine, another captivated by a strange animal, while one of the queens was obsessed by her wish for a child. Sorcerers and fairies, fearsome monsters, ogres and old washerwomen, acrobats and courtesans are the protagonists of this loose interpretation of the celebrated tales of Giambattista Basile.

“It is a masterpiece of black-comic bad taste and a positive carnival of transgression. The secret is the deadpan seriousness with which everything is treated.” – Peter Bradshaw, The Guardian

The life and career of the renowned stage magician turned scientific skeptic of the paranormal, James Randi.

A fishing-boat crew takes on a dangerous commission to smuggle a group of illegal immigrants from China to Korea.

Three years after his wife, acclaimed photographer Laura Freed, dies in a car crash, Gene keeps everyday life going with his shy teenage son, Conrad. A planned exhibition of Laura’s photographs prompts Gene’s older son, Jonah, to return to the house he grew up in—and for the first time in a very long time, the father and the two brothers are living under the same roof. Underneath the affection and friction that is a part of restored family life between these three, we feel the striking loss that marks each of them. At the same time, the three have completely different memories of the exceptional woman who influenced their lives so profoundly. Did any of them really know her?

“Trier’s sensibility for the dynamics of family, for the depiction of nebulous memory, and for the detail of life (the film’s full of beautiful, complex scenes), means that I’m already eager to take a second look and see what else there is to unpack. ” – Oliver Lyttelton, THE PLAYLIST

In an ancient world where monsters rule the land while humans keep to their own kingdom, a baby monster, Wuba, is born to a human father and monster queen. When mortals and creatures alike set out to capture the newborn, Wuba’s adventure begins. The cute baby monster Huba is the child of a human man and a monster queen, threatened by both monster-hating humans and monsters attempting to capture the new-born in an ancient world based on medieval China.

The Highest Grossing Film in China

A young Spanish woman who has newly moved to Berlin finds her flirtation with a local guy turn potentially deadly as their night out with his friends reveals a dangerous secret.

“Hands down one of the best films of the year, Sebastian Schipper has directed a one-shot film that is truly a captivating cinematic experience.” – Gregory Ellwood, Hitflix

A retired orchestra conductor is on holiday with his daughter and his film director best friend in the Alps when he receives an invitation from Queen Elizabeth II to perform for Prince Philip’s birthday.

“Paolo Sorrentino, with Youth, delivers his most tender film to date, an emotionally rich contemplation of life’s wisdom gained, lost and remembered – with cynicism harping from the sidelines, but as a wearied chord rather than a major motif.” – Jay Weissberg, Variety


Sponsored by Independent School of Winchester

Early summer. In a village in northern Turkey, Lale and her four sisters are walking home from school, playing innocently with some boys. The immorality of their play sets off a scandal that has unexpected consequences. The family home is progressively transformed into a prison; instruction in homemaking replaces school and marriages start being arranged. The five sisters who share a common passion for freedom, find ways of getting around the constraints imposed on them.

“The ensemble of young actresses is a constantly restless and real presence, the perspective filtered mostly through the cheeky Lale but also through the group as a loving crew.” – Nicolas Rapold, The New York Times

Men Go To Battle is the story of two brothers struggling to hold their crumbling estate together outside a small Kentucky town in the fall of 1861.

“This is a great example of a period movie  — and this should be the primary criterion for all period films — that succeeds foremost by evoking a real sense of the period it depicts.” – Philip Conklin, The Periphery

An aspiring photographer develops an intimate relationship with an older woman.

“This is a great example of a period movie  — and this should be the primary criterion for all period films — that succeeds foremost by evoking a real sense of the period it depicts.” – Philip Conklin, The Periphery

Liza’s a nurse, seeking love. Her only company is a long-dead Japanese pop star, who turns her into a fox-fairy out of jealousy. Now, every men who desires Liza shall die horribly. Can she overcome the curse?

“Károly Ujj Mészáros has created something very special here, a combination of sweet and sour, flashy and dreary, gross and sexy, intimate and spectacular. The end result is very addictive and very impressive.” – Ard Vijn, Twitchfilm

Film Club’s THE LOST WEEKEND would not be possible without the support of our sponsors.  Please visit their websites!

Museum of the Shenandoah Valley

Lauren Getz of the Beauty Lounge

In the Mouth of Dorkness

From the Projection Room:  A Film Club Blog

LOST WEEKEND V: A Weekend Around the World