Charles Olson’s gone. But some few years ago, there he was. Saw his mother and she was in a chair as he remembered her when she was alive. I remember that in a poem of his. Once he wrote, “Nobody studies / happiness,” and here I am with that, too. —Stanley Kubrick: Like he said, Kubrick: “Real is good; interesting is better.” Nobody studies happiness: The Shining (1980). 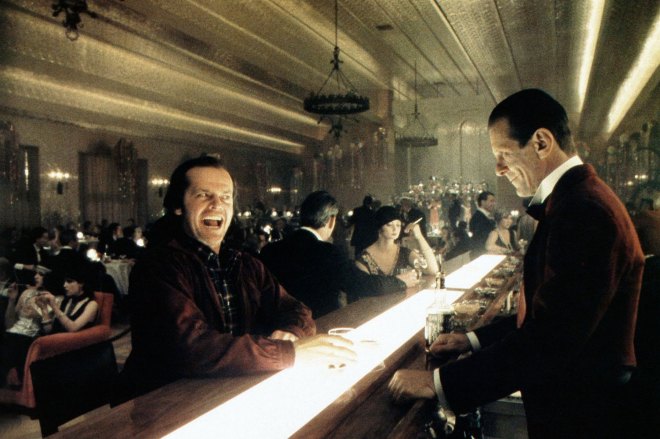 Jack Torrance pounds his life out the typewriter keys. Luck isn’t. Wendy and Danny, the wife, the son. New world here at the Overlook Hotel. New and strangely familiar journey up the dark and beautiful mountains. We know where we’re going but we don’t know why it’s familiar. Life on high and ghosts, too, like anywhere else. Only, the ghosts here can touch, can speak, can move and strike and open the doors to rooms where the future is closed.

What was it? Who was it? Feel my mind burning cold under the snow banks of this film—the atmosphere, it’s as heavy as the snow and wide as the bottom below; it induces one to feel severely restricted, and it will suffocate one as it suffocates characters and viewers in tandem with rot-gore images sourced from the unforgettable redrum flood. To be a guest here is to remember Home, to know Home, and what’s more, to yearn for it. I’m displaced in a pure void, writing to you from a place founded on Manifest Sickness. I don’t know anything but that I have to tell to find a way out.

I’m typing along to the great piano captured, like a film, like anyone watching The Shining. On this recording, titled Windmills, Lubomyr Melnyk’s hands just go, and I mean go; the dream-charged composition blown up by a power that rages and caresses, like fathers, like wind, blown up, blown out, clearing dead leaves of thought between the ears—what an album to try and think to! What an enigmatic film to try and write about! Invisible force, palpable power—what a rush! Windmills even at the danger of writing to you like so many do, swept away in the rush of what they’re hearing on high.

Of course, when it comes to music and The Shining, one can’t help but think of Berlioz with his Symphonie Fantastique. So full a hum in the thick of the throat, is that dense, bone-deep blow of the funereal “Songe d’une nuit du sabbat” (Dream of the Night of the Sabbath), which is about as frigid of a melody I can recall. Yet the heat of the dance, the movement of the witches, ghouls, the monsters, shades, bells and the brush-fire of the evening beneath a night of horror that looks like any other night—just the black, and the objects and that energy that drives and drives until we see and feel the fire out, the power shot forth, gone. What depth of hopelessness is that? And what could be more fitting a piece in this film? 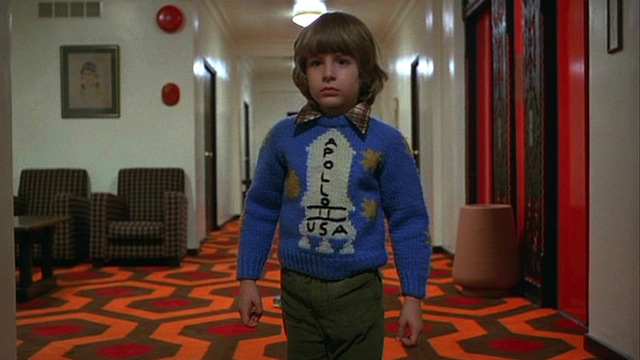 —Well, the rush and the rage and the force, they are fathers in this story. They live here, as the ghosts do, residentially, above one of Stephen King’s fave’s: an old Indian burial ground.

Horror loved Kubrick. Horror loves King, too. But King doesn’t love The Shining because Kubrick’s the greater artist, and The Shining belongs to Kubrick now, est. 1980. When you’ve seen the film, you’ll know.

Yes, Jack—the character; not the character that is Jack Nicholson as Jack Nicholson, but the character that is Jack Nicholson as Jack Torrance. What a character! Nicholson’s performance, at times over-the-top, yet captured, and never out of place; a fine, walk-on-the-line-of-losing-it, trapeze over the abyss, performance; all those legendary takes en repeat per Kubrick helping not a little. Likewise for Scatman Crothers (Dick Hallorann) and Shelley Duvall (Wendy Torrance)—what endurance! [See DVD and Blu-ray and YouTube and others of the heavyweight media et cetera for info and explanatory notes on Kubrick’s much discussed quantity of takes. Or, summarily: REHEARSALS ARE A WASTE OF TIME!].

Who slipped monocaine into this man’s bourbon? Jack Griffin. Jack Torrance. Disappearing act—where is Torrance? Wherever Johnny is . . . . What horror is this, when alone at the top of the mountain, man can finally know what it all was, what is and what isn’t, and do, finally, what one’s entire life has brought him to? I cannot actually tell what Kubrick shows.

The Shining has it all. But don’t try and write about it. The ghosts that bully reason were kin to Kubrick, and they will come for you if you do. It’s all there. Go and see. Don’t be late.

Nobody Studies Happiness: Ghosts And Madness On The Mountain In A Brief Review Of The Shining