Oh yes, The Hallow. Your ticket read, The Woods. So call it, The Woods, if you please. Both are C+’s from IFC Midnight. So come on, then. 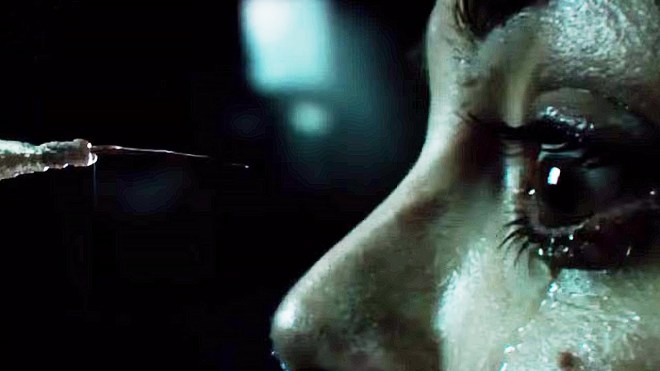 This film feels how it looks. We start bright with all of the promise sunshine can offer one taking the ferry to a new life. Good god it is bright and warm under such a hot coin; that boat keeps it moving and we’re ex-patriots, yes, and travelling to Ireland where director Corin Hardy’s story of Adam, Clare (Joseph Mawle and Bojana Novakovic) and their baby son, takes its seedy root.

Banger house with barred windows. A mill house all sag and chips. Signs of long life: rust, bad wood eaten up and miles and miles and miles (and miles) of lush green forest—this is what Adam and Clare wanted, likely dreamed of, when cramped in London town locked away in another story. But they’re here, now: Ireland; and windows barred with iron by previous owners make not a difference, spark not even a sand grain of concern regarding their most recent happiness. Take a ferry to a new life. Gone. Bright white and blinds like romanticism.

[Oh, by the way, the dogs name is, Iggy. Which could be close to funny if you think about those Stooges, those musical Stooges. Now, back to it].

Adam and Iggy walk the forest, look the trees, examine the trees, connect with the trees. Nothing doing while this sleepy picture crawls its frame. Nothing even really cinematic until the music turns guide, directs the viewer how to perceive the dead and rotting deer carcass Adam and Iggy uncover on their trek—the ominous now known with black, viscous blood, the wild hair and rotting flesh hammering the message of the stomach-turning sight home. Romantic fade. Dark notes and tones.

Adam’s a scientist; concerns concerning forestry and the health of trees concern him greatly, and if you were to imagine that this now known piece of information inspired his budding family’s move, well, you’d likely be on to something. He’s going to save it!—What’s it, you ask? The tree!, of course. Adam’s going to save the tree!

All well and good; but, what is it, how is it, this understanding, Adam’s understanding of trees? Where does it come from? What shaped it? What’s really beneath this microscope? What did Adam touch with his bare hands before England, Mum, textbooks and tradition touched and bound him? And what can he bring now, a man out of bounds from multiple views, to this saving mission?

Yeah, who knows? But by the looks of it, Adam’s dallying in the dense and hallowed forests of Ireland look to be the start of a great lesson for him. Just a shame he has a family in tow, for what will they reap? For, when real and supreme ignorance couple with a lack of noble understanding, a greater price than tuition must be paid; this comes, is shown, and that brings the horror down like a pissed off Chatterton writing, “For how can idiots, destitute of thought, / Conceive or estimate, but as they’re taught?”. —Forgive the end-rhyme, for he was only human.

Creatures closely resembling little Pumpkinheads thieve babies in the night. You already know what Adam and Clara have . . . . For this trespassing on the Hallow (which basically constitutes living in the house Adam, Clara and the baby live in/walking in the woods, poking around, touching shit (and trees, too, of course)), Adam and Clara’s baby is declared a recompense. In the folklore, this event is already known. Not specifically, of course, with reference to these characters, but, it is known that the Hallow will come for any and all trespassers on the sacred land.

It comes to the house, it comes in the house, moves within the walls, flops down into the crib, inhumanly reaches out to the car, mysteriously clutches and chokes out the engine, pokes for entrance into human eyes: it comes, it grows, it lives within living organisms—this is, the Hallow. Born of unknown origin and recorded in folklore, this is the apple of existence Adam refuses to bite into, seemingly, for no other reason than that, having not been sufficiently able to account for it by a most rational and scientifically appropriate explanation, that is, supported by facts and evidence, it must simply, surely—yes, has to be—be pure nonsense.

Adam’s conviction is compounded by his increasingly odd, yet altruistic, neighbor, Colm Donnelly (Michael McElhatton), who, due to Adam’s unwillingness to lend a listening ear to him (Donnelly has suffered something awful at the hands of the Hallow and earnestly cautions against the actions of Adam that are, in his mind, eventually leading him down that very same path), eventually bursts with that beloved and often parodied line that unites so many horror films with but a itty-bitty mouthful of painfully truthful words. Yes, that’s right, it’s the “you should have listened” line: YOU SHOULD HAVE LISTENED! And on and on and on into that bloody tradition.

Well, Adam should’ve listened. And hey, you know what, Clare should’ve listened, too. Especially when Donnelly broke into their home and dropped off his fancy fairy tale book. Shoulda listened. Here come the little pumpkinheads now, the pangs of suffering and mostly nothing else . . . . Oh, a touching recognition of loss in a scene of awakening with Clare holding her baby . . . then, the nothing else from here on out.

If you’re a teenager at home, expecting friends, rifling through your satellite search results and looking for a “good one” for the late night, sure, add The Hallow to your list. But if you’re going to the theatre, something else is being shown . . . . Or else . . . YOU. SHOULD. HAVE. LISTENED!

YOU SHOULD’VE LISTENED! A Review of THE HALLOW