Gremlins, directed by Joe Dante, is an interesting combination of many elements. At first thought, it doesn’t sound like this story should be good. Take a cute creature, have it go through a pupil stage where it becomes scaly and mean, and turn it into a family movie? But it does work, as many will agree. 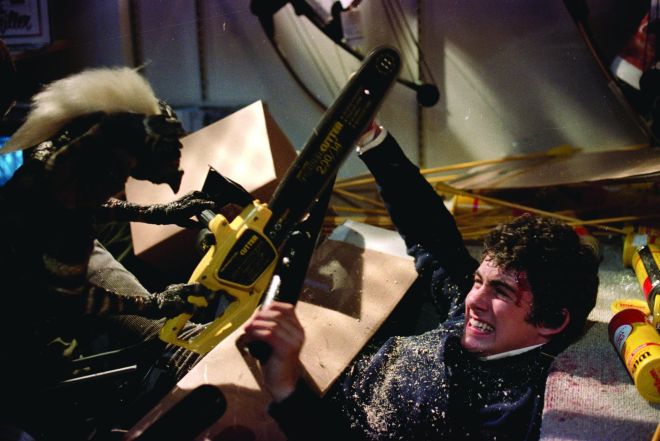 In many ways this is a “scary” movie. You have the creepy Chinese grandfather, reluctant to sell the harmless-looking Mogwai to father and inventor Peltzer. Then there’s the famous warnings – no bright lights (or sunlight), no water, and no feeding after midnight. Once the rules are broken, chaos begins. The resulting little monsters are not brainless zombies. They are actually intelligent: cutting phone lines, playing Christmas records, figuring out how useful the pool at the Y is, and running a projection room so they can watch Snow White and sing “hi ho, hi ho”. The best thing though was when one hot wires the electric staircase chair of Mrs. Deagal. There’s also the neighbor Mr. Futterman, as the character no one takes seriously when he warns Billy about gremlins in foreign-built machinery. And, like many old time science fiction, add a scientist (or science teacher) to the mix.

Speaking of Mrs. Deagal, with her comes elements of other famous movies. She’s a Scrooge, not wanting to be charitable or forgiving of debtors at Christmas time. Then she’s like the wicked witch of the west, wanting to kill Billy’s dog, too. 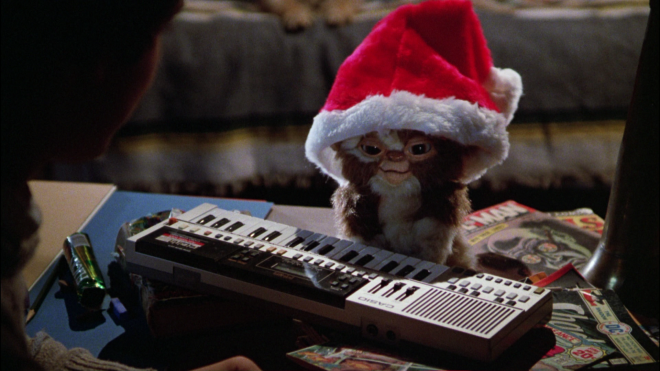 The overarching theme of this story is about the love of family. The Peltzers are a good family. Sure, the dad is out often we assume, trying to sell his cool yet questionable inventions. But even while on the road, he’s thinking about his son, and he calls home regularly to say hi and see how his wife is doing. The mom loves both dad and son. She uses the inventions, despite the fact that these inventions make life harder. She also is no wimp when the gremlins attack her kitchen. Armed with her wits and a knife, and an invention, she willing protects her family when she grinds one up in the popcorn popper, stabs the next one, microwaves another, and burns the 4th one in the fireplace before Stripe attacks her from the Christmas tree. Hmm… Treevenge thoughts just now…

Anyway, no matter how you look at this movie, whether you see it as a horror story or a comedy or a Christmas story, or a mixture of all that, this is a fun movie to see! The references to classic films made while the gremlins wreck havoc on Dorry’s Tavern were hilarious. I loved seeing a gremlin play the old Star Wars Atari video game I used to play. And I got another surprise – I had forgotten a very young Corey Feldman was in this, and I had no idea Howie Mandel is the voice of the cute and cuddly Mogwai, Gizmo! 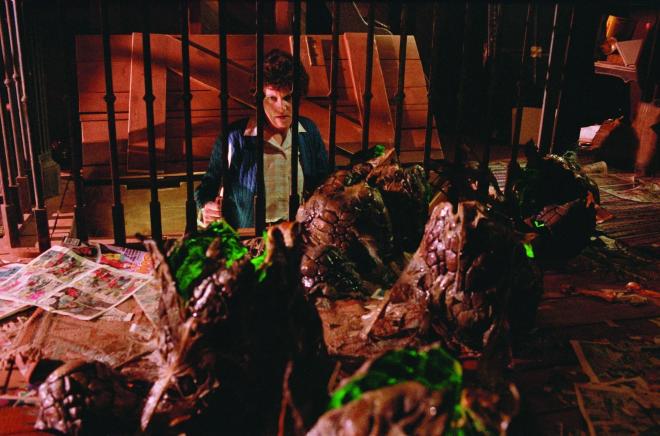 So, love your family, and don’t buy pets from elderly Chinese grandfathers. Unless you think you’re responsible enough to follow the rules.

I love exploring and trying new things, I’m a single mom to a good teen son, I was a Doctor Who fan years before it was cool, I love reading and watching mysteries. I speak Italian.  I am a Jersey girl!