If you know going in that A Married Couple (1969) is a part of the Criterion Collection’s Eclipse Series and is a documentary that follows the relationship struggles of a real married couple in sixties Toronto, you expect an almost-too-raw, emotional portrayal of real people.  What you get instead is a jackass in red bikini briefs hamming it up for the camera, nude family vacations,  and a sudden disregard for sixties nostalgia. The movie, directed by Allen King, follows 40-something ad copy writer  Billy Edwards and his brassy, decade younger wife Antoinette, and their struggling marriage.

Or, at least, that’s what it was about when it came out– 46 years later, it’s also about the sixties and how fucking weird they were, or maybe I just think that because I was born in 1979. People of my age and cultural milieu think it’s a little unusual for a whole family to run around naked together in a marsh or for spouses to publicly suggest that their partner cheat/swing at a party, or for a grown man to stroll around his house in red briefs and a sweatshirt, smoking a pipe. In Billy and Antoinette’s marriage, none of that is odd, or even cause for comment. I read some things that suggest these things are in the movie to lighten it up and add humor, but to me they just make the film harder to connect with. I guess I’m willing believe that someone who was bopping around in the late sixties might not have found these things strange, but to my Generation X eyes  these oddities made it harder to connect with Billy and Antoinette and their relationship. Fred and Wilma, they are not.

The movie is really about fights. Just about every scene in the film is Billy and Antoinette having a seemingly innocuous conversation that balloons into a domestic screaming match. They fight about money, sex, decorating the house, dividing household tasks. “That sounds about right,” the married readers of this review say, and it would be right, if it weren’t for THE BILLY PROBLEM. 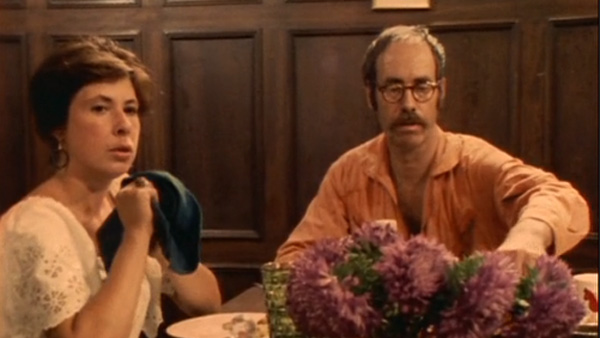 I’m sure when A Married Couple debuted in 1969, following a real relationship around with a movie camera was an innovative and artistic idea, and this movie probably seemed incredibly raw and real compared to the scripted stuff on TV and in the theater back then. But the modern viewer has tons of reality show TV viewing under their belt, and there is no question that Billy is a classic reality show drama queen, throwing fits to get on camera. It’s the same reason he eats dinner in a giant leather and fur vest with a huge beaded pattern on the back (paired with the red briefs, again).  He is playing to the camera, and Antoinette bears this out in a Youtube interview from the 2000s I found after seeing the movie. She says she feels Billy performed for the camera, and watching the film, you can tell. In nearly every fight, it is Billy who is the first to begin screaming, the first to throw out over the top insults. He takes fights from zero to sixty for no obvious reason–except the film crew in the room. When Antoinette gets annoyed that he’s telling her how to vacuum, Billy reacts to her slightly aggravated tone by immediately screaming that she’s a cunt.

There’s a truthful core to these fights, but it gets obscured by Billy’s antics. When he keeps trying to get Antoinette to sleep  in the king size bed with him instead of in the separate bedroom she keeps for herself,  it’s clear that he’s really  hurt . But he loses all sympathy when he throttles it up to a screaming match, getting furious so fast it sure seems like some proto reality show producer was egging him on. That’s what I’d think if this was The Real World, anyway.

I complain about Billy being a ham because it hurts the premise of this documentary, but it’s worth noting that he’s kind of an asshole as well.  My condescending view of sixties gender roles and enlightenment about spousal abuse let me cut him a little slack for living in another era, but his rants about how Antoinette has to do everything he wants because he’s the breadwinner and  one particularly physical fight make him seem like a sexist dickhead no one would want to marry. Allen King structures the movie so the fights escalate over time, with the worst coming at the end,  so its clear to me that Billy was pushing the line even by the standards of his era. In the interview I saw, Antoinette says that King focused on the negative parts of her and Billy’s relationship, and that the movie’s portrayal is accurate, but only of that aspect of their marriage. So if you have a hankering to watch a documentary about an almost totally unrelateable, crumbling marriage, A Married Couple is the flick for you. I’d rather watch something fun, like Requiem for A Dream.

Monty has a pretty great Sangria recipe that you should try.

A Review of Allan King’s A MARRIED COUPLE; or, a Documentary About an Unrelateable, Crumbling Marriage

2 thoughts on “A Review of Allan King’s A MARRIED COUPLE; or, a Documentary About an Unrelateable, Crumbling Marriage”