Andy G. saw me coming out of the grocery store.

I answer. A Charlie Bucket smile on his face

At that point, the film in which I had agreed to review was still but a mystery to me, as it was to anyone who bought a ticket to the Film Club screening that Thursday, August 27th. (“Private,” was printed on the ticket). So, unknowingly, I accepted my invitation, more than once, to The Invitation (2015), this thrilling slice of mystery courtesy of Drafthouse Films COO, James Shapiro, who chose it especially for Film Club attendees that evening.

A little mystery at the Alamo? Sure, why not?

Come Thursday, I’m good on my word. I’m also early. But a handful of after-dinner sleepy people stretching arms, looking around and chatting. I don’t know what to do so I order some food.

Sitting on the leather-back, holding a dog-bowl filled with fried chicken tenders and fries, fueled by this food-link to my youth and thinking about the dog-bowl dish as well, I remember the cramped cinematic experiences of my youth in this town, when mystery had me wound up tight for the second round of Star Wars films released a decade or so ago. I recall a crotchety elder noisily commanding teens this way, that way. Some worked for him; most didn’t. The lobby was filled with lines of people and a few video games, pockmarked by the ratty, bay-colored carpet and punctuated by the bad candy behind the counter you thought would taste better because you were told by other crotchety elders that you get what you pay for.

Fried-food inspired thoughts aside, this was to be yet another memorable night at the Alamo.

Under Karyn Kusama’s direction, The Invitation is a sharp thrill; tightly knit, well suspended. Tension builds exceedingly, exuding like molasses from frame to frame. The mind exclaims (and some audience members actually did exclaim) behind the eyes following the trail of scenes—point being, engagement with this film hardly appears a choice, until it’s over and you’ve had the time to think your participation through. A most powerful and captivating movie, is The Invitation.

Starring Michiel Huisman, Logan Marshall-Green and John Carroll Lynch, The Invitation, outwardly, is a story of friendship, of reunion, of bonds, of human links and the desire for those links to transcend the pain that can be one life feeling alone under the weight of the world. Inwardly, we have here a tale artfully constructed that prompts viewers to ask just how far the human mind is willing to go to fire its person to action with the goal of transcending/escaping/avoiding feelings dark, burdensome and consummately destructive.

The Invitation begins with an introduction to the films strongest character, Will (Marshall-Green). Much about Will points to suffering. As viewers watch him driving in the opening sequence, Will appears to be staring well beyond his point of sight, instead looking backwards in his mind, sinking in a somber reflection.

And why wouldn’t he be, when considering where he’s heading? Will and his girlfriend, Kira (Emayatzy Corinealdi), are driving to his ex-wife, Eden’s (Tammy Blanchard) dinner party being held at the same house they once attempted to raise a family in—a failure the severity of which, in terms of pain and suffering, seems to have brought nearly all but death to the two young adults.

Kusama, in her effective way of storytelling, directs the audience to follow Will closely; consequently, viewers become attendees at the dinner party, arriving with Will and Kira to participate in the evenings carefully arranged events. Through Will, viewers catch a glimpse of he and Eden’s previous life together, which is critical in framing this night in its true context. This is evinced in flashback scenes, horrific rifts in consciousness in which an emotionally fractured Will suffers from visions past, undoubtedly fueled by the sense-connection with objects within the arena of his great pain. In these flashbacks, viewers hardly recognize Will—hair short, clean-shaven; absolutely not a single trace of the Jesus-like visage that brands him now.

Will’s languid, stultified movement, disheveled appearance and mostly detached demeanor suggest that his pain harbored in the past holds much of his person there as well. Will appears on the fringe, already carrying too much, and the film has just begun. This is a man in the throes of something awful, which is a brilliant stroke on behalf of his character, as audiences cannot fully trust in his guidance, as Will is clearly intoxicated with grief.

Let the party begin! Enter the guests, but mostly confusion.

It’s been two years since Will or any of his friends, Tommy (Mike Doyle), Choi (Karl Yune), Gina (Michelle Krusiec), Claire (Marieh Delfino) or Miguel (Jordi Vilasuso) have seen/heard from Eden. When we arrive with Will, all appears well under the circumstances, convoluted as they are—again, a man (Will) and woman (Eden), formerly married, reunite in the home they once shared and lost a son in, surrounded by their former friends and things, joined by the woman’s new husband, David (Huisman). Yes, all appears honky dory, for what it’s worth.

Not too long, though, before Will’s vision, a sharp split between horrid past dreams and a painful, present reality, begins to discern signs presaging disaster.

There’s a couple of guests none of the friends recognize. One, introduced to the party by David as “Sadie” (Lindsay Burdge), is but a thyrsus short of donning the garb of a manic Bacchae. Sadie, in her own unique way, somewhat similar to Will, appears quite distracted. Once she professes her love for an entire group of people she just met, the picture of one who went to Burning Man and never quite came back, a black widow in the barn netting the unwary with pleasure-promises, emerges as an increasingly volatile addition to this increasingly odd get-together. Sadie is presented to all as a sort of “house pet” in David and Eden’s home—something not one guest is comfortable with, but nevertheless reserves their true feelings in a cult of silence binding the old friends in more ways than one.

Added to the guest list is yet another stranger, Pruitt (John Carroll Lynch). Pruitt is Lynch’s bulking death sentence of a character from Zodiac (2007). Just try and tell the difference between the two. Soft as he may appear talking high on forgiveness, Pruitt proves about as merciful as a shrike, cozy as Lou Reed’s Metal Machine Music (1975).

Who are these fucking people?! Why are they here? What’s wrong with Eden? seems to emanate from the minds of the guests, expressed through the eyes showing bafflement and disclosed somewhat discreetly through all the half-drunken blathering and largely artificial cheer; yet it finds expression only through Will’s voice, synonymous with the voice of the audience. Will dares to break through the cult of silence; does it alone, with results varying considerably. “Can we (the audience) trust him?” is a question that drives The Invitation along at a slow, but powerful pace. Impossible to look away.

All of the wonderful epicurean delights (the extravagant, last supper-like banquet, outrageously expensive red wine and red velvet cake) of the evening and bright reunion cheerfulness serve as a smokescreen when considering some of the special precautions that have been taken. Safety measures, David concludes. Windows within the home are barred. David locks doors; keeps the keys on his person. Cell phones won’t work. And, added to these startling facts, the group gets a surprise screening of the “look at our cult and special happiness video.”—Wait, WHAT!?

Yes, the hardest pill to swallow for the evening is the revelation of what Eden’s really been up to the past two years. Sure, she was in Mexico. But this was no leisure trip, not a vacation. Strange has grown stranger . . . .

We have here a group of individuals, each united by a traumatic past event, broken thoroughly and yearning for a kind of forgiveness that will allow their lives renewal in meaning and the strength to fight down what nearly took them entirely.

As members of this group, David, Eden, Sadie and Pruitt say what you might expect them to about achieving happiness in a tone indicative of the mindset of one who feels, truly, that they’ve somehow evolved, somehow transcended age-old manacles of pain and anguish; and what’s more, can freely dispel the truth, with pinpoint accuracy, that points to how everyone else has not done so, yet most certainly could if they’d only receive the truth secured within the confines of the group—there is no life but group life; no love but group love. Riff raff, in short.

I’m wholly engaged watching this film unfold. As a member of this dinner party, I feel Will’s frustration when finally, pressed yet again by the indomitable will behind the groups “special” members, Will lashes out at David, excitedly stating: “You don’t know me. You can’t.” attempting to ward off the condescending “Come on, dear brother, why so suspicious of us?” talk flopping out of David’s mouth. I hear Bukowski reading from “The Genius Of The Crowd”: “and those who preach peace do not have peace / those who preach love do not have love / . . . beware the knowers.”

Promises both idealistic and empty as balloons, disguised as truth, fall their frail forms into nothingness, wilting words from oh-so-seriously loving mouths promising escape from what generations of men and women have lived and died in. “Pain is optional,” says a sure-mouthed Eden, her eyes sinking behind the glaze of a chemically induced intoxication. “Come and play with us, Danny. Forever… and ever… and ever.”

A shield comes over Will as he fights with his weapon of sense through other voices claiming they’re off “to a better world, to peace,” in this enrapturing film exploring a modern-day representation of an increasingly interesting human experience.

Bolstering The Invitation’s action is the film’s skeletal score, a haunting, prickly set of sparsely spread out notes effective in their ability to incite one’s awareness of malaise like a fast hand of nimble fingertips racing up the spine.

100 minutes and not a second wasted, this is The Invitation in summary. Sacrifice this much of your life for a thriller you won’t soon be forgetting. 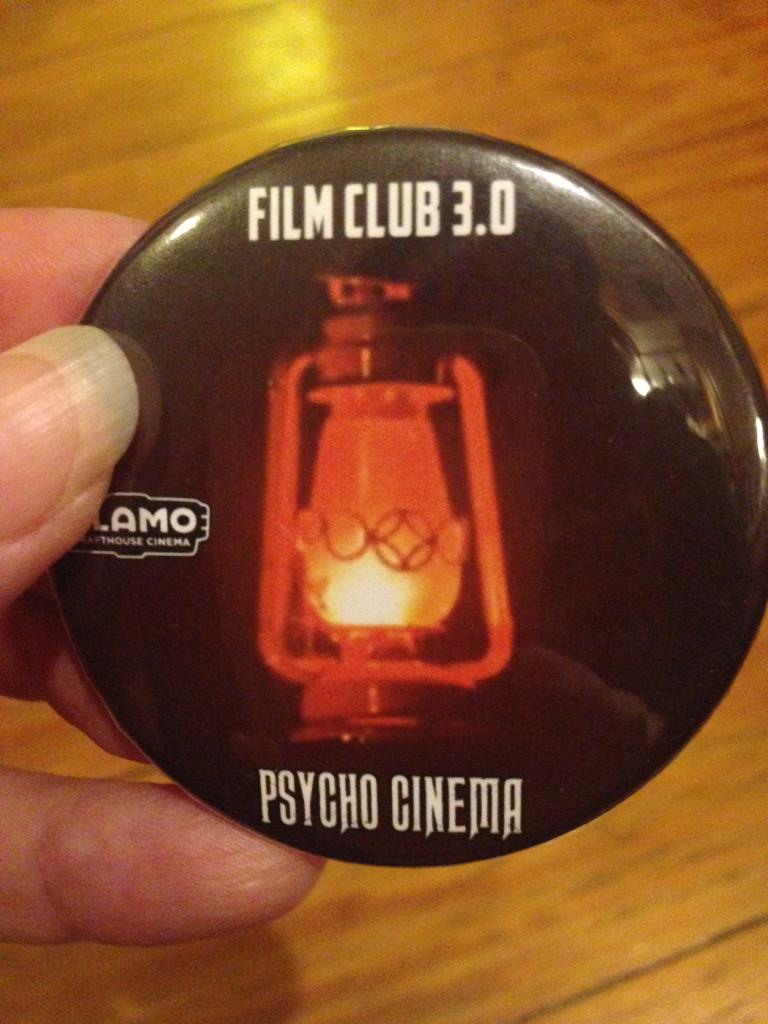 Cult Of Silence: Film Club Gets a Visit from Drafthouse Films with an early peek at THE INVITATION