1985 was an amazing year for cinema. So many fantastic movies, both cult and mainstream came out. Rocky IV, Pee-Wee’s Big Adventure, The Goonies, The Breakfast Club, and The Color Purple were all among the top 20 grossing films of the year. However, there was a juggernaut that beat all other movies at the box office that year. The movie was nonsensical, racist, and just not great. But, audiences LOVED it. This movie was Back to the Future.

I’ve never really been a huge fan of this movie, and had not seen it in quite some time. To me, it was one of those films that was just there, and I never understood its popularity. Even as a kid I was bored by it (I dug the DeLorean, though…still do). I re-watched it and came out hating it more than I ever did. Let’s talk about this film a little, shall we?

Last week we had a review of the film on here, so I’m not going to rehash the plot. I’m not going to explain EVERY problem I have with this movie There’s not enough space for that. This is NOT a positive review, so if you love the film and don’t want to read the rest, I give you permission. 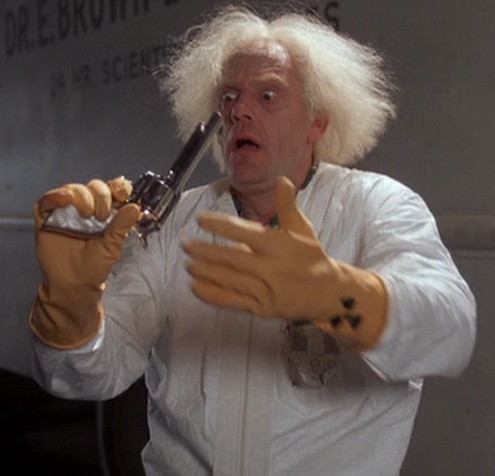 Ok, let’s start with a biggie.

So, if someone tried to rape your wife once, would you hire them to work for you? I’m guessing most of you said probably said no. But to those who said yes, hey, I guess in thirty years you forget such trivial things and just chalk it up to boys being boys.

Speaking of the end, does anyone besides me think it’s weird that the McFlys’ don’t recognize their son as being the guy who HELPED them get together? Wouldn’t George be a LITTLE suspicious that his son looked JUST LIKE a guy his wife had a crush on in high school?

(Also, even though Marty’s family are now clearly WAY more successful and well to do, they still live in the exact same house, in the same old neighborhood. AND how is this magically a nice neighborhood now?)

(Also, in the movie Marty inspires Goldie to run for mayor one day…who inspired him before?)

The thing that bothers me the most, though, was when Robert Zemeckis retconned history and made Marty McFly the inventor of rock n’ roll. Let’s make the white man responsible for EVERYTHING!

There’s so much more I want to complain about, but, look, I get it. This is supposed to be a popcorn film. There are still some genuinely funny parts to it (my favorite being Doc Brown’s face as a flaming model car drives into a pile of rags). Maybe the 80’s were simpler and we didn’t have to think about equality and plot inconsistencies. Maybe I want more out of my movies. I don’t know. Back to the Future doesn’t give it to me, though.

Don’t even get me started about the lightning bolt….

Back To The Future? More like Back To The Casual Racism and Time Travel Inconsistencies : A Review

2 thoughts on “Back To The Future? More like Back To The Casual Racism and Time Travel Inconsistencies : A Review”