Last summer, when the news came out about Robin Williams’s death, I (like many others) was heartbroken. He had been such a part of my childhood and adolescence. Everyone mentioned that their favorite movie of his had been Aladdin, or Dead Poets Society, or one of the many, many others in which he starred. One movie that did not get the love it deserved, however, was The Fisher King.

Back in the days of video rental stores, our local shop would have sales where they sold their used movies for very cheap. It was always exciting to go in and see what they had to offer. One fateful sale produced my three most watched movies of my teens: Goodfellas, The Silence of the Lambs, and The Fisher King. That day was a good day.

The Fisher King is the story of Jack Lucas (Jeff Bridges), a DJ akin to Howard Stern in his most popular, vulgar, shock-jock glory days. His belittlement and abuse to one of his callers indirectly causes a mass murder. Lucas, once king of the airwaves, loses everything and spirals into depression. One night when Lucas is attacked while wandering the city drunk and depressed. He is saved by a homeless man wearing a homemade armor set named Parry (Robin Williams). 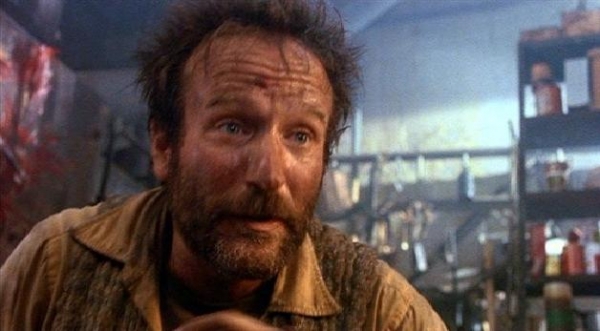 Parry and Jack form a reluctant friendship. Parry, in his deluded state, is searching for the Holy Grail. Jack is cold to him at first, but then finds out that Parry was once a history professor who went mad. We find out his wife was murdered in front of him during the mass murder that Jack inadvertently caused.

I don’t want to give one thing away about this movie. It’s charming, sad, and beautiful. I feel this is director Terry Gilliam’s best work. His style works so well with this story. No director is better when mixing the surreal with real life. From ghostly red knights to a dance scene in Grand Central Station, Gilliam’s makes it all make sense in the scope of the tale.

The actors themselves all give incredible performances. Mercedes Ruehl, who plays Jack’s long suffering girlfriend won the Oscar for Best Supporting Actress. Williams was nominated for Best Actor, and in any other year might have won, but lost the award to Anthony Hopkins for The Silence of the Lambs. I’m not exaggerating when I say that I feel like this is his best performance. Jeff Bridges is fantastic as the sleazy, depressed Jack. The always wonderful Amanda Plummer shines as well, playing Lydia, the object of Parry’s affections. Michael Jeter steals the show, however, as a cross dressing cabaret singer who belts out an Ethel Merman impression that’ll blow you away.

This movie has it all. It’s a true classic and deserves to be seen. I feel that The Fisher King (along with Goodfellas and Silence of the Lambs) was a movie that shaped my tastes and love for cinema. If you have not seen this movie, please do. You can thank me later. 15 year old Keith will even come sing for you.

No cloudbusting, though. I draw the line there.

A new 2k digital transfer approved by director Terry Gilliam was just released by the Criterion Collection on June 23rd.  Grab your copy by CLICKING HERE

I Like New York in June, How ‘Bout You? : A Review of Terry Gilliam’s THE FISHER KING

2 thoughts on “I Like New York in June, How ‘Bout You? : A Review of Terry Gilliam’s THE FISHER KING”